Alas, an article about keyboards, the tools that guarantee your hourly journeys’ safety to the Internet, a place of wonders and memes. Also they guarantee that the potentiality of getting fired from your office job is significantly reduced, as long as you type really fast when your boss is looking. However, as all things, excessive usage maketh bad things, and if you use keyboards too much there’s high chance something bad comes from it. I’m talking about how the average keyboards aren’t designed so that you can get comfortable typing on it – in fact, your form while typing most likely is very awkward, and specifically harmful to your wrists. On that note, ergonomic keyboards came to being as a knight in shining armor… depends on the style of the prototype, of course.

Computer keyboards have come a long way, they took the forms of typewriters and change themselves so as to fit with contemporary needs. There are many types of keyboards, with different quirks to them, in contrast to the misconception that all keyboards are alike. Some prefer their keyboard to have easier access to certain keys (personalized or industrial gaming keyboards), some prefer it to be wireless, some want it to have a wide range of multimedia applications, which is a properties many integrated laptop keyboards have etc. Each one of them has their own unique thing, however, there’s one thing most are similar in: they are not specifically designed to give you a better time typing. Want to see really unique keyboards?

Office ergonomic tools being good is no longer talked about as a ruse, au contraire, they’re now on the positive ends of what’s considered necessary and what’s not for your working experience. As you hopefully already know, these rants of mine are usually very long in relation to other similar listicles and general opinion posts, as I somewhat intend to have a mix of both in all of them. That would mean in order to have a good rant I must have spent a lot of time typing, alongside thinking up things to type, which I don’t usually do. And, as implied, if I were using a normal keyboard, my wrists would have a lot of subtle pain that most likely only appears at random unlike cued unfunny cutaway gags on Family Guy.

Of course, that indeed happens for a while, my wrist would often be bent to the side of my forearms unbeknownst to me, as it can happen very frequently in the midst of enthusiastically typing up something. This can apply to workers who actually are workaholics too and too focused in their work to know about twerking… or bad rhyming… or that their typing form is unnatural. According to professor Alan Hedge, director of Cornell University’s Human Factors and Ergonomic Research Group, “When you put your hands on a regular keyboard, your wrist is often bent so that the little finger is really bending away from the wrist, since your arms are coming in from the sides. That’s called ulnar deviation. That results in compression on the ulnar nerve, and also it can cause compression of some of the tendons used to flex the fingers.”

In other words, having bad typing forms can lead you to being unable to play flutes as well as others.

That said, people often overlook this, obviously. Most of the time the pain or particularly wrist pain that results from this can generally be pretty minor and harmless, so it’s not enough to ruin their day, so they don’t care. However, for those who use keyboards at a much higher volume than most i.e. content marketers or copywriters, after a certain period of time depends on your biological design that minor pain can develop into a serious problem. Of course, at that stage, there aren’t many keyboards that can help revert things back, however if you want to prevent such a scenario from happening, getting yourself an ergonomic keyboard is one of the solutions. Again, they can’t help you if you already have serious Repetitive Strain Injury (RSI) or some serious forearm pain, but they can really help you get much more comfortable time typing as opposed to an traditional keyboard.

Of course, this is 2021, and people (some) have started to use text or speech programs to get rid of the need for typing entirely. Still, most of those programs are underdeveloped and too cool for school, or for work, making themselves inefficient and maybe beyond inconvenient in some cases. For ergonomic keyboards, I recognize that they also look and seem too cool for school, but as long as you’re willing to learn the ropes they can become very useful and powerful tools. What this means is, they are designed to rid you of the ol’ flawed hand postures, decreasing potential chances of hand especially wrist injuries, which in turns increasing your typing efficiency since now you feel more relaxed typing. I know this because while making the switch was hard for me at first as well, like my relationships with most ergonomic products, the benefits I received afterwards was absolutely worth it.

Everybody’s different and so are their body types, thus no one specific keyboard is good for everyone. So, as unfunny and rude as I am most of the time, I am a good guy, and I will give you a tour through 3 of my favorite ergonomic keyboards, particularly favored for their relatively minimalistic outlook and also their effectiveness in preventing wrist injuries, which can be the root of many pain that results from overworking with a normal keyboard.

You know how most laptop keyboards are integrated? So when you buy a laptop, you most likely will be stuck with it’s keyboard until you throw the whole thing out of a window in a fit. But these laptop keyboards, especially these days, make up for it by including a lot of multimedia features and commands that a normal keyboard don’t usually have. This Natural Keyboard Elite, however, being hailed as one of the best ergonomic keyboards ever, takes pride in it’s ability to include all of the features that fulfill your ergonomic needs.

Most ergonomic keyboards are designed so that the layout is split and spread out to both sides. That way the angle of our hands can be straight on the keys. This Microsoft keyboard is one of the first to realize that trend and even despite that, the layout design that it dresses upon is still very much in line with contemporary times and more. Besides the split design, the keyboard comes with a gently sloped curve and both combined to promote a more natural hand and arm position, as well as helping alleviate wrist strain. And not just that. As implied, this keyboard embeds within itself a very proficient multimedia control system, a one touch control over various computer functions and it’s own enhanced F-key commands. These combined give you easier access to your favorite music, video clips or media programs, as well as setting the perfect sound level with the integrated volume controls, enabling you to tailor your keyboard to match your needs.

In a lot of ways, the Natural Keyboard Elite can pretty much be the one to get as your first ergonomic keyboard, just to test the waters. It’s split, sloped design in my opinion is one of the best in that it gives you an easier time on the learning curve, as it naturally transitions you into a favorable hands and arms position, preventing wrist injuries without forcing it. Coupled that with multimedia control features, the Natural Keyboard Elite’s guaranteed to be the opposite of a waste of money.

I always point to this product when people say they want an ergonomic keyboard that they don’t have to get too far out of the comfort zone in order for them to use it efficiently. It won’t be the Natural Keyboard Elite, while plenty easier to use than most still actually requires a learning period, nor it will be any hip split (literally split, I mean) keyboards out there. No, it has to be the Logitech K350 Wireless Keyboard, or so according to me.

There’s a reason it’s one of the best selling keyboards on the market right now, which is that it’s specifically designed so as to making itself the best compromise between the ease of use such as that of a normal, classic keyboard and the contemporary ergonomic design. The Logitech K350 Wireless Keyboard adopts a wave design with constant curve layout instead of a split one, and it functions just as well in guiding your hands into the right positions like a split layout would. This wavy curve also allows the inclusion of the cushioned palm/wrist rest just below a more natural feeling, collectively helping your hands, arms and wrists get comfortable even for long term use.

This keyboard also has a multimedia center in the form of a black set of keys that is positioned at the top center, which includes volume control, and pause/play/stop/ff/rev system. As it’s wireless, it requires the use of battery, but this feature’s good enough even for professional computer user as the battery gives you up to 3 years of battery life, longer than most on the market.

My one complaint with this type, however, for all of it’s goodness in ergonomic design, programmability, is that’s it’s durability can be inferior than say the Natural Keyboard Elite. However it’s not too noticeable in that it can be troublesome, but definitely an aspect to consider in comparison.

Although I can be more biased over certain products, the Adesso’s position on this list can be justified with it being one of if not the most solid, well-constructed keyboard I’ve used so far. Most ergonomic keyboards can be really annoying due to the effort put on their designs up front and thus ignoring a fact that the back is also an important factor. This keyboard adopts a tall back side taking in a suitable height measurements, thus releasing the need for legs and at the same time preventing itself from sliding around as you type, a problem even many average keyboards have. Despite being thick and sexy and unmovable as such, this beauty is actually pretty lightweight too.

The Adesso Tru-Form has a more similar design to that of a split keyboard and thus it takes a lot more getting used to than the two above, however it can be also argued that it’s strengths totally make up for it. The split-favored layout is well-accommodated by the smart placements of extra keys such as the arrow ones and the Insert, Edit, etc ones. They are all in their original respective order to keyboard design so as to mix things up between the old and new forms of ergonomic split keyboard, making itself presentable to especially users who just discovered that ergonomic keyboards is a thing. The cut off in the middle and how the center set of keys are leaning towards the left help with placing your wrists in a straight line when you type and not having to tilt or angle them to reach some certain letters like one normally does with a normal keyboard. 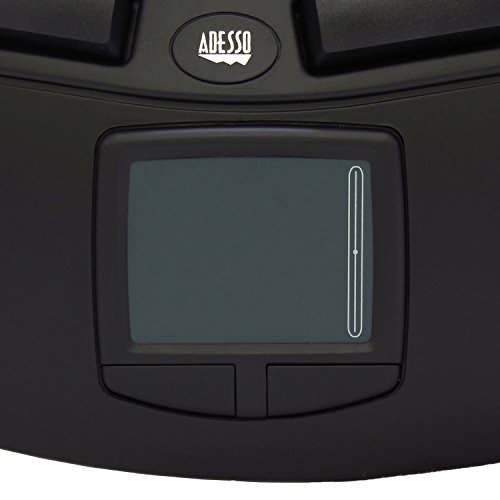 That’s not all, what I actually like the most about this keyboard is the baseline at the bottom of the keys, aka the wrist rest itself. The Adesso Tru-Form comes with a relatively large space to rest your wrists upon, shaped similarly to the keys into a wide V letter, being sloped slightly, combining with the said high top they prevent your hands as you type from getting out of the routine and improve your typing form without you knowing it. If there’s a con in this, it’s that in order to operate on it well, you need to have a good hand typing position.

All and all, bad. Michael Jackson’s Bad. Which is good.